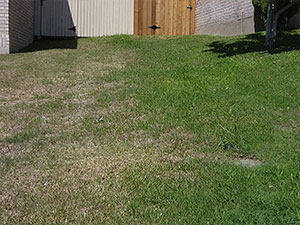 Winterkill is a catchall phrase used to describe the loss of turf grass during winter months. Here at Amazing Blades Landscaping, the health of your lawn is our number one concern, so we want you to be aware of the possible causes. They include:

Learn to identify grub damage! The larval stage of the May/June beetle will feed on turf grass in late summer to early fall, thus destroying the root system of the grass. Without a proper root system, the grass cannot absorb the necessary nutrients and water required for survival. There is an easy way to tell grub damage from environmental damage. Pull on the turf grass plant: if the grass pulls up very easily, then the damage is likely to have been caused by grubs feeding on the root system during the previous summer and fall. Also, in late winter to early spring months you can check for the white C-shaped larvae by examining the soil below the damaged turf grass. Generally, it takes at least 4 to 5 grubs per square foot to cause loss of turf grass.

You need to be aware of two main disease problems that can cause serious damage and/or loss of turf grass during the winter months: Brown Patch and Take-All Root Rot (TARR). While brown patch will attack all major turf grasses, it is primarily a problem on St. Augustine, Centipede and Zoysia grass in the fall months when nighttime temperatures drop below 70°F and rain is prevalent. While brown patch fungus does not usually kill the turf, it will kill all the leaf blades in the affected areas, weakening the turf and making it more susceptible to injury when the temperature is low. This will cause affected areas in the lawn to green up more slowly the following spring and dead areas may appear as this occurs. The easiest method to identify previous brown patch injury is to pull on the leaf blades in the affected area. If they pull away from the stolons (the horizontal connections between the plants) without any resistance, then the damage was likely caused by brown patch. Also, if brown patch is the only problem, then the stolons and roots will still be white to light green in color.

For clients that had Brown Patch last fall, it is very likely they will have trouble this spring. Preventive treatments are highly recommended as soon as possible to help prevent the damage instead of waiting for it to become active. Doing the preventative Brown Patch treatments will greatly reduce the damage and increase the health of the lawn going into spring and summer.

Take-All Root Rot is caused by a soil borne fungi that attacks the root system of the plant in the fall and spring months when soil temperatures are in the 60 to 65° F. range. While shown to attack all turf grasses, TARR has primarily been a problem on St. Augustine grass. Symptoms of TARR in the spring include thin, yellow strands of St. Augustine grass attached to large patches of totally dead grass. TARR and brown patch are often confused with each other and in some cases it is possible that both diseases were active in the lawn.

Grasses such as St. Augustine and Centipede are especially susceptible to winter kill from desiccation during winter months. It is often impossible to determine which one actually killed the grass, as the symptoms are so much alike. In some situations, loss of grass can be attributed to both dry soil conditions and low temperature injury. The entire turf grass plant will be a brown to tan color with both of these factors, eventually turning a gray color in late winter to early spring. Even though the root system is dead, the turf grass plant will still be firmly attached to the ground.

The effects of winter kill can be brutal on your lawn, but the experts at Amazing Blades Landscaping can help to eliminate and prevent disease and pest infestation. Call us today at 843-652-5296 if you suspect any of these problems in your lawn!

Amazing Blades did a great job and everything looks SO GOOD. They know what needs to be done and get it done!